by Tara Siegel and Ron Lieber, originally published by The NYTimes 03/05/2020

Your 8 Most Vexing Tax Questions, Answered

Changing rules have led to taxpayer confusion. We asked accountants and other specialists to help sort it all out. 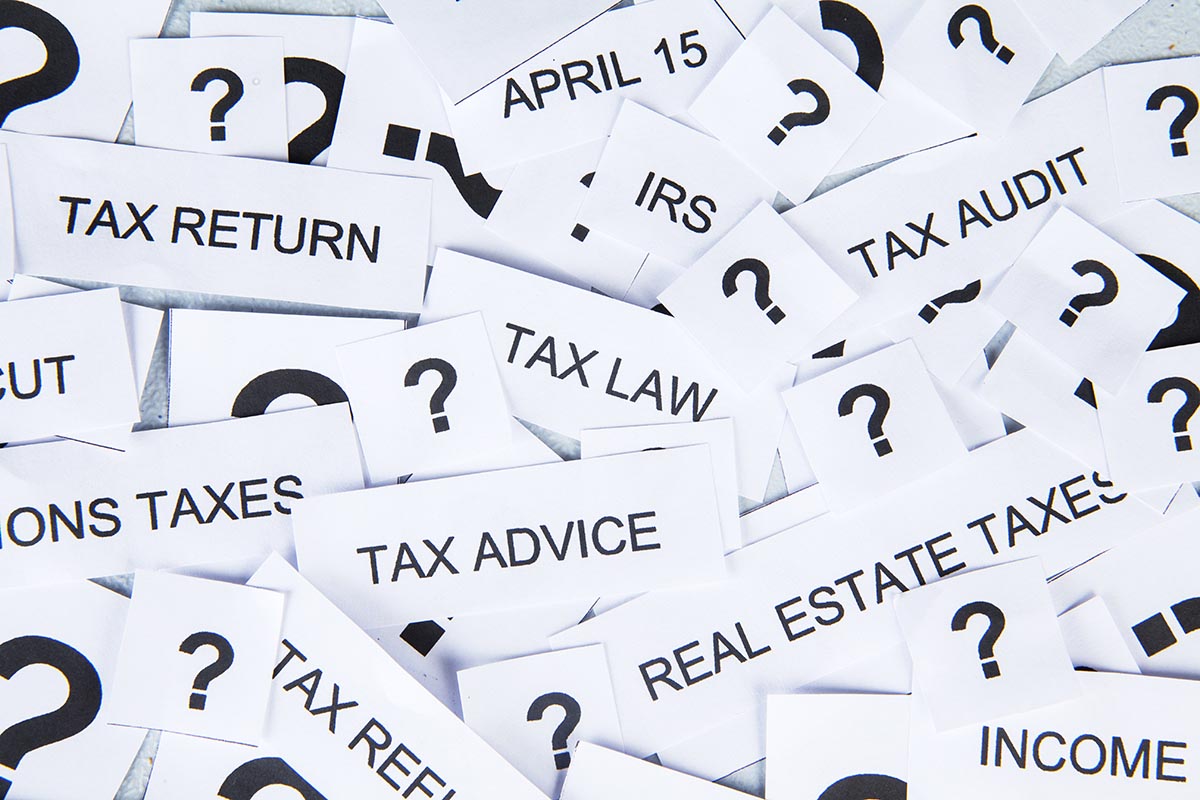 Filing your tax return may make your head hurt again this year.

For only the second time, Americans must cope with the new set of rules that sprang from the tax overhaul enacted by Congress in 2017. Many people are still adjusting to the law’s quirks, while puzzling over other legislative changes that came at the end of 2019.

With April 15 bearing down, we asked tax professionals across the country to share the questions that are most bedeviling their clients. Here’s what they said.

1. I’m confused by a new form that human resources uses to calculate my tax withholdings. How do I know I filled it out correctly?

You’re probably referring to Form W-4, “a particularly confounding, boring form that everyone has to fill out and no one understands,” said Russell Garofalo, founder of the tax firm Brass Taxes. But if you get it wrong and your employer withholds too little from your paycheck, you can be hit with a tax bill — and possibly a penalty.

This tax season, the form underwent a major overhaul to reflect the changes to the tax code. Before the redesign, it was largely based on the number of so-called “allowances” you could take. Allowances represented personal exemptions, or the amount of money you could deduct for yourself and dependents.

But personal exemptions are no longer available, so the new form walks filers through five steps that try to capture all income sources and also account for tax breaks.

Your best shot at getting it right if you do it yourself? Grab a caffeinated beverage, a recent pay stub and your latest tax return. Then go to the Internal Revenue Service’s tax withholding estimator tool online, which will provide instructions on how to fill out your W-4.

“What the I.R.S. has built is user-friendly, but it is kind of like doing your own tax return on their website,” said Julie Welch, an accountant in Leawood, Kan. “It is pretty precise.”

Because there isn’t much “fluff” built into the amount withheld, Ms. Welch said you need to be sure you are entering everything carefully. Don’t skip items like the bank interest you earned, for example, or you will risk withholding too little.

There’s also a line for any outside income you’re paid. But do you really want your employer knowing that? Probably not, which is why tax pros suggest using line 4(c), instead, which lets you withhold a flat extra amount from each paycheck, with slightly more privacy. (Or you can set money aside and make estimated quarterly tax payments on your own.)

The I.R.S. tool also has a neat refund slider — it’s fun, to the extent that taxes can be — so if you wanted no refund or a $500 refund, you can bake that into the results generated as well.

2. I owed the government money last year for the first time, and it appears that I do again. What happened?

After the 2017 tax law took effect, tax rates generally decreased. So when the government told employers how to tweak the amount of tax they withheld from workers’ paychecks, it mostly suggested decreases, and sometimes filers didn’t withhold enough. If you found yourself in that situation last year — and you didn’t update your withholdings — it is likely to happen again.

But the new law wasn’t the only possible reason. A big life change like marriage, or a job with a new salary, often requires you to tweak your withholdings — but most people don’t.

3. The rules that require minimum withdrawals from retirement accounts changed. How does this affect me?

Until this year, people were generally required to begin withdrawing money from their tax-advantaged retirement accounts when they turned 70½. Now, those who can afford to leave the money untouched can let it sit in those accounts until they are 72. That change came at the end of last year, when legislation called the Secure Act was attached to a much larger spending bill that became law.

What does this mean in practice? If you turned 70½ in 2019, the old rules still apply. That means you have until April 1 to take a required minimum distribution — otherwise you may face a stiff penalty.

But if you reach age 70½ this year or later, you aren’t required to withdraw money right away — you have until April 1 of the year after you reach 72.

Keep in mind that these rules generally apply to employer-sponsored retirement plans as well as traditional individual retirement accounts (but not Roth I.R.A.s, at least while the account owner is still alive). And if taxpayers are still working, they may not have to take minimum withdrawals from their employer’s plan.

4. Certain individual tax breaks have been extended this year. Do any apply to me?

Quite possibly, if you had education expenses, significant medical costs or made energy-efficient improvements to your home. Several popular tax breaks that expired at the end of 2017 have now been renewed for tax years 2018 through 2020, (which means you would need to refile your 2018 return to claim it for that year).

Here’s a sampling of those changes:

When high-income couples get in touch with Louise F. Cochrane about buying a home in the pricey San Francisco Bay Area, the conversation often becomes a lament: A married couple can deduct the interest on only the first $750,000 of a mortgage.

What some unmarried couples are now doing, Ms. Cochrane says, is simply not getting married. They file separate tax returns and claim deductions on up to $750,000 in mortgage debt each, even though they use one loan to buy a home together.

Ms. Cochrane, whose office is in Alameda, Calif., offered some advice. The couple should have a cohabitation agreement, which can lead to a fair resolution in case of a split. And she said each partner needs a will and trust, too, if one person wishes to leave half of the home to the other.

6. What is the best way now to be tax-smart when making charitable donations?

Clients have been asking Jennifer Kohlbacher, a Tulsa, Okla., accountant, how they can contribute to charitable organizations while getting the largest tax deductions possible.

The issue arises from the 2017 tax bill, which nearly doubled the standard deduction: It will be $12,200 for single people this year and $24,400 for married people filing taxes jointly, and fewer people are bothering to itemize.

Ms. Kohlbacher advises those making charitable gifts to bunch two years of intended contributions into one, in an attempt to itemize deductions every other year, at the very least. And if you must take withdrawals from an individual retirement account, she says, give straight from the I.R.A., so that the money is not subject to income taxes.

Then, engage in strategy: Look ahead to the next few years of expected income and figure out whether you can pinpoint when taking an itemized deduction would be most advantageous. Then consider how to give, perhaps by bequeathing stock that you bought a long time ago rather than cash: “It can make sense to give securities with a low cost basis instead of recognizing capital gains,” Ms. Kohlbacher said.

There may not be one.

A big gift of the 2017 tax legislation is also among its mysteries: What sort of work do you need to be engaged in to obtain every bit of a new 20 percent tax deduction on qualified business income?

One pertinent Internal Revenue Service explainer on the topiccomes with a bright red “Caution” warning, noting that it is undergoing revision. Whatever words spring forth, this area may well be an audit bonanza for the I.R.S.

Plenty of self-styled advisers and consultants now approach Minnie Lau, a San Francisco accountant, with mistaken notions of how they can get the tax break. Ms. Lau tells these clients that they may be doing themselves a disservice, because high-income consultants may face limits on the deduction. “The word consultant is the vaguest term in human history,” she said. “It tells me nothing. Consultant of what, dude?”

Quite often, her aim is to get people to label their work (accurately) as something other than consulting, so as to qualify for as much of the deduction as possible. “I’m asking a question to get you in a better place,” she said.

8. Can you please help me deduct my meals at a fancy restaurant, say, the French Laundry?

Entertainment deductions disappeared in 2017, and that raised questions about the 50 percent deduction for business meals that remained.

Some expenses Ms. Lau waves away immediately, like those from people who bring in receipts showing purchases — for themselves — from San Francisco coffee shops. That deduction doesn’t fly if you’re not doing business with, say, a client while diligently caffeinating.

Monday-Friday 10:30am-4pm
Saturday by Appointment Only

By Appointment Only
Tuesdays & Thursdays 11am-5pm